Skip to content
You are here:Home-Industry News-Hawaii-How a Business Venture of Friends Became a Big Player in the Virus Response

Every1ne Hawaii used its founders’ connections to wealthy investors and local influencers to buy and distribute millions of masks. 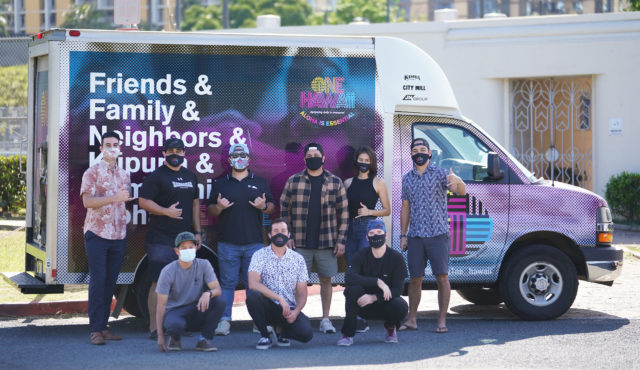 The Every1ne brand name has since been widely visible on social media and in truck-side advertising as the group fulfills its goal of giving masks to people who can’t easily find or afford them.

So who is behind Every1ne Hawaii? And how did they get the funds to buy millions of masks and give them away?

In the midst of the COVID-19 pandemic response, it would be easy to mistake Every1ne for another nonprofit that is stepping up to help. But in fact it’s a for-profit business venture that has benefited from undisclosed funders and community donations as well as family and political connections.

Formed in January by a group of friends, many of them former Punahou classmates, Every1ne set out to encourage civic and social engagement.

Frustrated by the political divides and growing disconnect between communities in Hawaii, the group’s leaders said they wanted to foster civil, more inclusive public discourse about polarizing issues like climate change, immigration and the construction of a Thirty Meter Telescope on Mauna Kea.

Every1ne’s first project was going to be a street music festival and voter registration drive in Kakaako. But when the founders learned that the Coachella music festival had been canceled due to COVID-19, they quickly understood the severity of the virus.

Not only would a music festival be impossible, but they knew their message of activating the millennial voting bloc would be inappropriate in the throes of a public health crisis.

So they changed gears. Instead of voting, they pivoted their focus to the threat of the coronavirus in Hawaii.

Lobbying the Caldwell administration to mandate mask-wearing in public became the group’s first initiative. The Every1ne founders said they decided to endorse mask-wearing in public in mid-March after researching the issue and talking with several of their friends who work in the medical field in Hawaii, as well as in virus hotspots like New York.

Five days later, Caldwell publicly recommended mask-wearing for the general public even though that same day Gov. David Ige and State Epidemiologist Sarah Park cautioned against the use of masks for people other than health care workers.

At that time, mask-wearing for the general public was also not recommended by the federal Centers for Disease Control and Prevention.

Kurisu said Caldwell’s announcement came on the heels of numerous conversations between Every1ne founders and the mayor.

“I don’t want to say that it was completely us,” Kurisu said. “But we were definitely there to support the plan and we were there during that press conference. And part of it was that we were going to be that system to get masks to people who didn’t have them.” 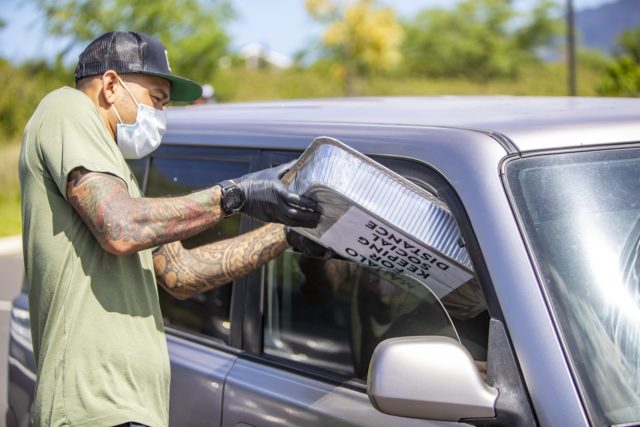 At a mask drive in Maili, volunteers from Hands In Helping Out distributed 5,000 disposable face masks acquired by Every1ne Hawaii. UFC fighter Yancey Medeiros helped pass out masks to people arriving by car, bike or on foot.

The problem was this: In March, there weren’t millions of non-medical masks available in Hawaii. According to Kurisu, much of the dialogue between Caldwell and the Every1ne founders centered on how the state could obtain a ready supply of masks for people to wear.

The Every1ne founders decided that they would be the solution. Tapping into their networks of friends, family and colleagues, the group found a mask supplier in China and bought an entire production run of disposable, one-time use masks.

Unlike nonprofits that are required by law to reveal their major sources of income and expenditures, Every1ne declined to say where it got the money to buy millions of masks and how it is paying for other projects.

Kurisu said masks were purchased with money from five anonymous private investors, some of whom are the co-founders’ family members and friends.

Kurisu is the son of prominent Hawaii businessman and real estate investor Duane Kurisu, who is part-owner of the San Francisco Giants and who built the experimental homeless housing community Kahauiki Village.

Duane Kurisu is also the chairman and CEO of aio, a media and digital consulting company whose brands include Honolulu and Hawaii Business magazines. Aio names itself a supporter of Every1ne’s mask initiative on the company’s website.

“I’ve been criticized about being too nebulous about helping people understand who we are and what this is,” Robert Kurisu said. “Really it was a handful of guys that stepped up and said, ‘Let’s just place the purchase order,’ because every week that we delay and try to figure this out the purchase block could go away.”